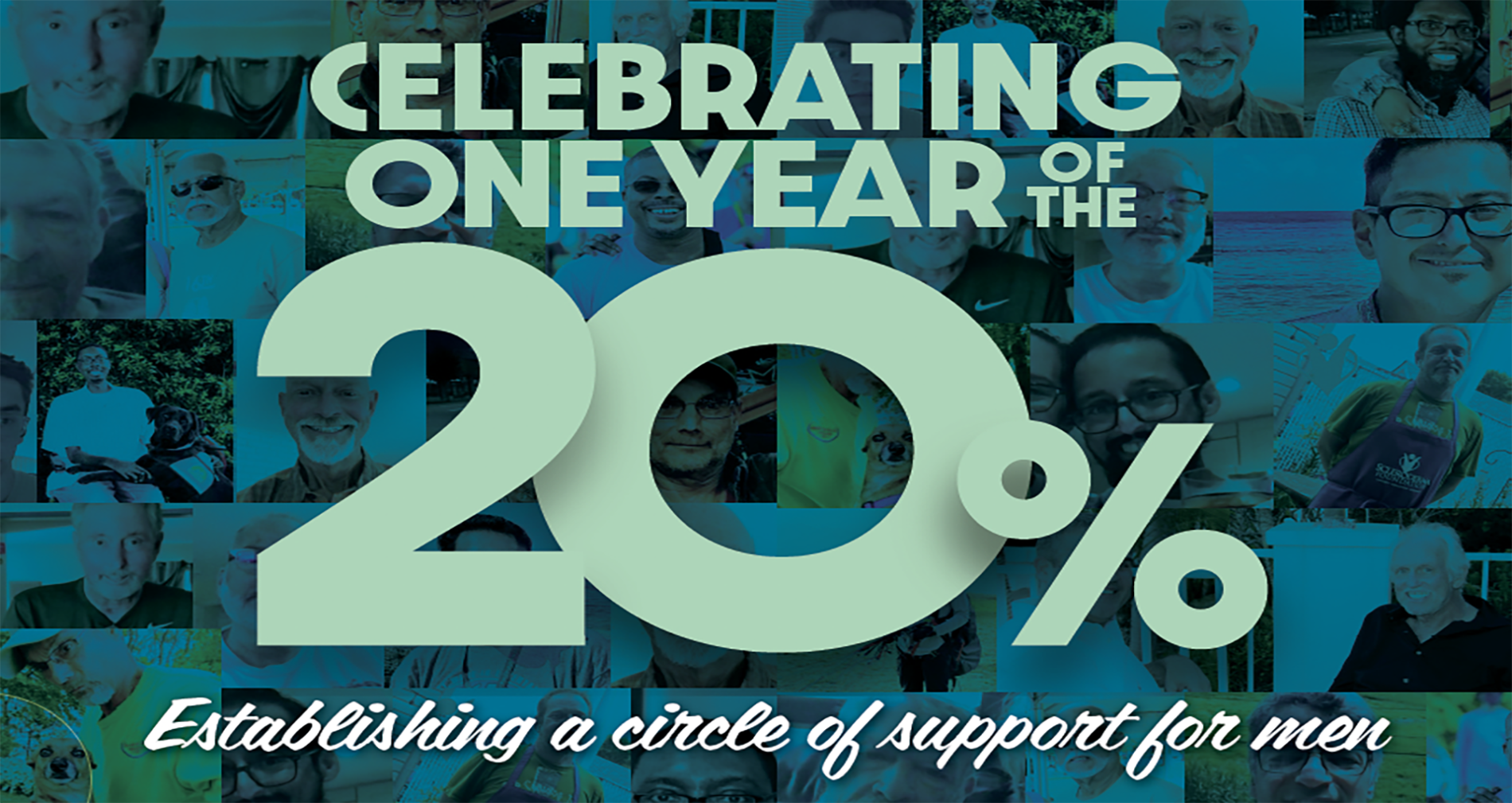 Celebrating One Year of The 20%

Establishing a circle of support for men

“Men in my generation aren’t supposed to cry.” –Michael Bessert

These are the three words that best describe Michael Bessert’s journey with scleroderma. Michael, now 64, was diagnosed with scleroderma nine years ago when he was 55 years old.

“I was symptomatic for a long time, but didn’t know what I had. I started out with GERD, Raynaud’s, and fatigue. Later, I developed skin tightening. One year later, I was diagnosed with scleroderma and my doctor gave me five years to live.”

An estimated 20% of people living with scleroderma are male. Michael, who has diffuse scleroderma, is even more rare, “part of the 20% of the 20%,” he says.

During the years following his diagnosis, Michael began volunteering with the National Scleroderma Foundation Michigan Chapter and attended support groups hosted by the Foundation. But, as a man, it was difficult for Michael to find a home with the groups he attended, since they were primarily comprised of female members.

“I tried attending support groups with women, but it wasn’t right for me. Guys have distinct issues from women. Sometimes, we’d be in groups and the women would apologize to us men as a preface to having a women’s-only discussion.”

Having experienced a lack of support for men with scleroderma firsthand, Michael made it a point to “advocate within advocating” for other men like him. Michael contacted national office staff, encouraging the staff to represent men in communication materials and at sessions during the National Scleroderma Conference. Michael also posted resources for men on social media. These were just a few of the ways Michael pushed for greater awareness that scleroderma is a men’s disease, too.

“When Laura asked me to lead the men’s group with Jacob Davila, a bunch of emotions hit me. Jacob was my hero. He was the most profound leading male scleroderma advocate in the world, and he devoted his life and put his own health on the backburner because of scleroderma. When I got that email from Laura asking me to join him and help other men with scleroderma, it was a big deal. I was being recognized for my own work, and was among the ranks of Jacob Davila. Wow. It was validation that my voice had been heard—that I matter.”

After much preparation, Michael and Jacob launched The 20%: A Virtual Support Group for Males Living with Scleroderma during our June 2021 Scleroderma Awareness Month. Four months later, Jacob Davila passed away from scleroderma. The entire scleroderma community was riddled with grief. But Michael, who was with Jacob when he passed away, knew that he had to persevere to serve the other men in his and Jacob’s shoes.

“After Jacob passed away, I broke down,” Michael said. “At our next meeting, after he died, I told everyone ‘This is tough, guys, but we’re going to go on because this is what Jacob would have wanted.’”

In Scleroderma Awareness Month of June 2022, The 20%: A Virtual Support Group for Males Living with Scleroderma celebrated its one-year anniversary.

“Our anniversary meeting was awesome,” said Michael. “Some of the guys who showed up were also at our very first meeting one year prior!”

“Before he passed, Jacob asked me to replace him,” Erion said. “I said ‘Sure, Jacob—I’ll jump in with Mike.’ And right from the beginning, Mike and I clicked. It is pretty cool to lead the group with him.”

The 20%: A Virtual Support Group for Males Living with Scleroderma has truly become the world’s strongest circle of support specifically for men living with the disease. Both Michael and Erion are proud that men from across the world make it a point to attend their support group meetings every month.

“We are an international group. There are men who join us from all over the US, but the need is so great that we also have men from other countries like New Zealand who have started to join us as well. Eventually, we’d love to be able to accommodate these different time zones with two meetings per month instead of one.”

Michael, Jacob, and Erion are among the men in the Foundation’s community who are truly men for others. Selfless, empathetic, purpose-driven, and servant-leaders, these three men are invested in supporting other men suffering from scleroderma. The Foundation is grateful for everything they’ve done.

“Now, men have a space to be free, open, and honest about how we really feel,” Erion said. Our support group offers men a chance to talk about our experience having scleroderma and how to navigate our daily lives living with this disease.”

The 20%: A Virtual Support Group for Males Living with Scleroderma meets virtually on the fourth Wednesday of every month at 7 PM ET. To join or obtain more information, please email Michael Bessert at mbessert@scleroderma.org or Erion Moore at emoore@scleroderma.org. The Jacob Davila Memorial Leadership Award was established to honor the life and legacy of Jacob Davila, to learn more or to support the award, please visit scleroderma.org/DavilaLeadershipAward.